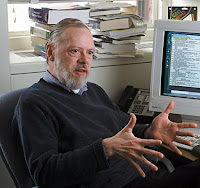 We lost another computing pioneer of a very different kind. Dennis Ritchie, who developed C and co-developed Unix, passed away last weekend. Ritchie and Ken Thompson received the 1983 Turing Award for their development of Unix.

In the early 80's I programmed extensively in assembly language on the Apple II and IBM 370. In both cases we needed speed a high-level language couldn't get us. C and Unix let us take advantage of high-level constructs and abstraction and yet retain the full power of the underlying machine. Ritchie changed the way we did computing.

If there is a moment that captures both Jobs and Ritchie, it was in 2002 when the Mac moved to the Unix-based OS X from which also the Apple iOS was later derived. As you play with the new iOS 5, you can't help but think of these great pioneers that made it possible.
Posted by Lance Fortnow at 9:13 AM