Forgotten but not Lost in a Mapless World

Massimo Vignelli passed away on Tuesday, a visionary designer known for many things in particularly the 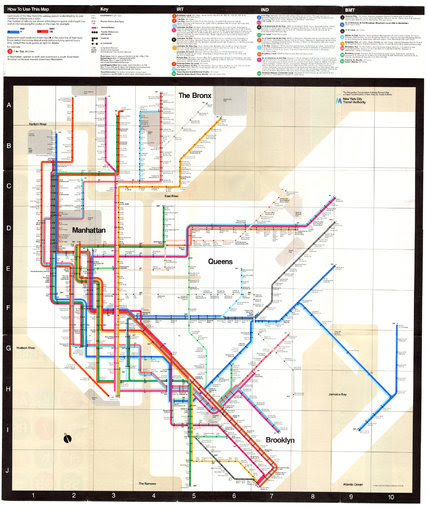 1970s NYC Subway Map. I used to pour over this map as a kid, finding the shortest route from my father's apartment on the upper east side to such exotic places like Coney Island. The subway map was not at all close to scale, central park certainly is not more wide than tall, but that didn't matter to me. The map did a great job showing how all the lines interconnected and that's all I needed.

I had a great skill in my younger days getting places using maps. I abhorred getting directions or following people--just tell me where you want me to be and I'll find it with a good (or at least topologically correct) map. If you make a mistake with directions you get hopelessly lost. If you take a wrong turn, a map is self-correcting.

My daughter was surprised to hear I used to carry maps in my car. Now I just use Google Maps to show me the way. I completely lost my map finding skills and often my sense of direction. Last week I ate at a restaurant managed by a relative in San Antonio. I couldn't really tell you where in San Antonio it was, Google Maps just took me on a series of highways to get there and then a series of highways to get to my hotel near the airport afterwards.

In the future when we just get into our steering wheel-less self-driving cars and enter our destination on a smartphone, we may all lose our sense of direction. Just like we no longer remember phone numbers, we just type in our friend's name to be taken to their place of residence. Location may not matter any more, we'll leave it all to the machines.
Posted by Lance Fortnow at 8:28 AM