Spoiler Alert: This post has details from the final episodes of the HBO television series Silicon Valley

A few times I've gotten emails from people claiming they have shown P = NP and asking whether they should keep their algorithm a secret to protect the cryptography out there. My typical response is that they should use their algorithm to mine a few bitcoins and then get back to me.

The fictional characters of Pied Piper faced this dilemma when they AI they created "developed a general solution to discrete log in polynomial time" with some nice complexity class diagrams in the background. 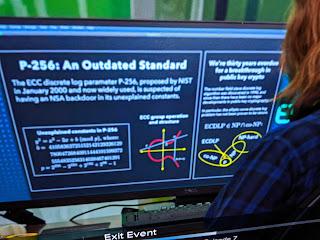 Pied Piper was about to roll out its new internet, a distributed network that communicated between cell phones based on a compression algorithm developed by Pied Piper's CEO. Rolling out the network would reveal even more advanced compression based on breaking discrete log. "If we cancel it or shut it down, then others will try to copy or reverse engineer everything that we've built ... Our launch has to fail, publicly and spectacularly."

But here comes the P v NP dilemma: "And what about all the other stuff we're gonna do? I mean, give internet to underserved communities, students in the homework gap, refugees, genomic research. Pied Piper can help scientists cure cancer."

I'd take broken encryption over cancer any day. You can still do encryption even if P = NP, one-time pads distributed via USB drives or quantum. And cancer sucks.

They should have mined a few bitcoins.
Posted by Lance Fortnow at 7:35 PM