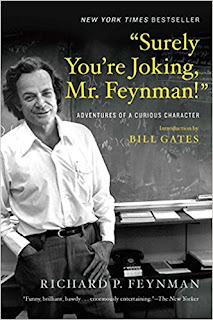 When I took cryptography from Manuel Blum, he handed out copies of the chapter "Safecracker Meets Safecracker" from Richard Feynman's book Surely You're Joking Mr. Feynman. Feynman, the Nobel Prize winning physicist who was born a hundred years ago today, wrote this book not about physics but just a series of stories from different times in his life. This chapter described how Feynman learned how to open locked safes in Los Alamos during the Manhattan Project.

We all have interesting stories to tell but Feynman finds a way to keep things compelling in a way most scientists could not--even if he sometimes comes off being a bit of a jerk, hence the title. This book inspired me to tell my own stories which occasionally show up in this blog.

His most important stories form The Feynman Lectures on Physics (free to read online), an amazing explanation of deep physical concepts.

which begat a proof-of-concept paper by David Deutsch and Richard Jozsa which begat Daniel Simon's exponential separation which begat Peter Shor's factoring algorithm which begat billions of research dollars and considerable expectations, real and imagined, for Feynman's vision.
Posted by Lance Fortnow at 4:29 AM