Graduation from the Other Side 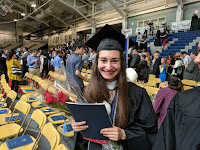 I've attended many graduations in my time, mostly as faculty, a couple of times as a student or a brother. This last weekend I attended my first university graduation as a parent as my daughter Annie graduated from Brandeis University in Waltham, Massachusetts. Brandeis has a big graduation ceremony with lots of speeches and then different departments or groups of departments have their own diploma ceremonies with their own speakers and where they give out the actual diplomas.

Brandeis gives out a number of honorary doctorates each year and for the first time gave one to a computer scientist, Turing Award Winner Leslie Lamport. Lamport received his PhD at Brandeis in math in 1972 before they had a CS deparment but now he has an (honorary) PhD in Computer Science. Lamport gave an eight-minute talk in the School of Science ceremony. But when you are a parent the weekend is about your child and my daughter didn't graduate from the school of science so I didn't see the Lamport talk.

In the main ceremony, Brandeis has not only an undergrad give a speech but also a grad student. Sounds like a crazy idea, but Vivekanand Vimal, Neuroscience PhD, gave what could be best described as a performance art. Since I can't find the video of Lamport and you probably don't want to see my videos of Annie, enjoy the new Dr. Vimal's ode to the craziness of the PhD and saving society.

Posted by Lance Fortnow at 7:31 AM