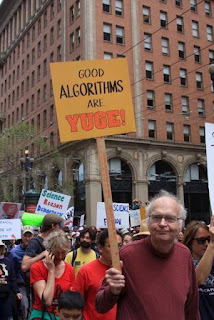 While Bill marched at the main March for Science in DC, I marched at the satellite march in Atlanta, my daughter Molly in Chicago, Scott Aaronson in Austin, Hal Gabow in New York, and Donald Knuth (pictured) presumably in San Francisco. I thank the many of you who participated in your local march. Science appreciates the support.

Most of the marchers I saw did not come from the ranks of academia or professional scientists. Rather people from all walks of life who believe in the important role science and scientists have in shaping our future. Parents dragged their kids. Kids dragged their parents.

There have been some worry about politicizing science and whether the march would be a bad idea. The march won't have much effect on policy positively or negatively. But we mustn't forget that scientists need to deal with politics, as long as the government continues its missions of funding science and using proper science to help guide policies that require understanding of the world.

If there's one positive sign of a Trump presidency, as Molly explained to me, it's inspiring a generation. We would not have had a March for Science if Trump wasn't president, but what an wonderful movement and we should march every year around Earth Day no matter who sits in the oval office.
Posted by Lance Fortnow at 8:57 AM