MIT and Tel Aviv business school professors Dimitris Bertsimas, Erik Brynjolfsson, Shachar Reichman and John Silberholz wrote an intriguing paper Tenure Analytics: Models for Predicting Research Impact about using metrics in tenure decisions, Moneyball for academics. The paper is behind a firewall but here is a preprint (with the Moneyball title), an essay by some of the authors, and an article from Inside Higher Ed. 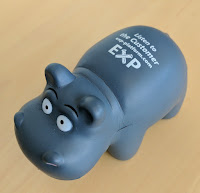 Brynjolfsson works extensively on metric-based decision making and gave early warnings on the loss of jobs to ML. I still have the HiPPO (Highest Paid Person's Opinion) from his EC 2010 invited talk. I like it for the complexity class on its back.

In this article, Brynjolfsson and his co-authors use properties of the co-author and citation network graphs to predict future paper-citation based metrics, like the h-index for professors at top ranked OR departments. The paper claims that their metrics do a better prediction job than tenure committees.


Many professors oppose the use of bibliometrics in hiring, tenure and promotion decisions, saying that scholarly potential can’t be captured in a formula most often applied to pursuits with a bottom line, like winning games or playing the stock market. Such a system inevitably will be “gamed" by academics, critics say, and time-consuming but ground-breaking research will be sidelined in favor of “sure things” in terms of publishing -- the academic equivalent of clickbait.

I have a different issue--the use of bibliometrics to judge the current value of a professor. In baseball, the original Moneyball, there are measurable goals: runs, wins, championships. So you can use data analytics to both measure the current and future potential of a player. In academics, what makes a great professor? I hope the sole answer isn't the h-index. And without a subjective method to measure a successful professor, how do you train a model to predict for it?

I'm not against using metrics to help with tenure and hiring decisions but I still put most of the weight on the letters.

The article does talk about predicting INFORMS fellows from the network centrality model, predicting a subjecting decision from objective statistics, though doesn't compare that to tenure decisions. I wonder how well one can predict ACM Fellows as well. Another challenge here: As CS is a constantly changing field, can one use an algorithm that predicts today's fellows from 20 year old data to predict future fellows from today's data?
Posted by Lance Fortnow at 9:18 AM