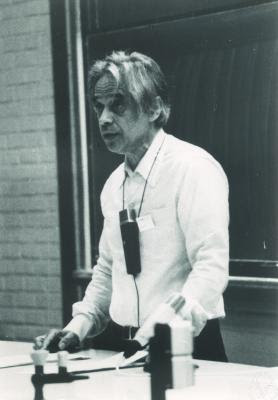 While traveling, I received the unexpected sad news that Ernst Specker passed away on December 10, 2011. He was born in Zürich in 1920. After receiving his doctoral degree at ETH Zürich in 1949, he spent a year at the Institute for Advanced Study in Princeton. Then he returned to ETH in 1950 and stayed there with the exception of two visiting appointments at Cornell University.

Ernst Specker was teaching Linear Algebra when I started my studies at ETH Zürich in 1967. His teaching style was different from the typical polished and streamlined presentations of that time. He was looking for interaction, and did not hesitate to interrupt a proof to insert an example when he sensed that the audience was not following.

Outside the classroom, it was a turbulent time. The youth movement started to question many long established rules of society. For a long time, it seems that the majority of people, without ever thinking about it, had accepted the claim that the US with its war in Vietnam was defending western values. Quite suddenly, this consensus was widely questioned.

ETH had its own little problem. A new law governing the ETH (the only federal university in Switzerland) had just been adopted by the parliament. Many students took issue with the idea that the main goal of ETH was not to satisfy a general human right for education, but to prepare the students to serve the interests of business and industries.

Ernst Specker, who always liked discussions, never accepted anything based on authority without asking some critical questions, had quickly established a relationship with the young students at this time of evolving political turmoil.

Here are two examples, typical for Ernst. The mathematics and physics students of each semester had an open discussion about the ETH law. One professors came to our group to tell us, we should not complain, its our fault, we should have had this discussion a year ago, when it was the proper time to voice any opposition. He was not happy, when Ernst disagreed, noticing that this group of students has only been here for half a year.

A more important move was Ernst Specker's engagement for the Manifesto of Zürich, a public declaration against police brutality after some excesses when the "establishment" was shocked and fearful of the demonstrations in downtown Zürich.

During our studies, we all had to give talks in four seminars in different areas of mathematics. This rule was widely followed with one exception. A large group of students participated in the logic seminar, and they came back ever since (naturally in addition to the other seminars). Every semester, there was a different theme. My first subject was the solution of Hilbert's tenth problem, presented with all background information and details. The seminar was conducted with Hans Läuchli. Paul Bernays, who had started the seminar when he came from Göttingen before the second world war, was still a regular participant. He often followed the talks reading the blackboard with a two minute delay.

Ernst conducted the seminar still long after his retirement, because unfortunately ETH no longer had a position for mathematical logic. I participated in Ernst’s last logic seminar during my sabbatical in 2002. We ended the semester with a talk of Ernst that was intended for a general mathematical audience. I reserved the beautiful and rather spacious Aula of the ETH for this purpose. Luckily, we could still switch to the Auditorium Maximum, in the last minute, when we saw the people  arriving.

Scientifically, Ernst Specker has worked in many areas as illustrated in by the Selecta volume published by Birkhäuser on the occasion of his 70th birthday.  In his dissertation with Heinz Hopf, Ernst worked on cohomology groups. Then he moved on to investigate constructively in analysis, and the foundation of set theory, in particular Quine's new foundations. He also solved one of the early Erdős problems. Ernst’s most famous results are the works with Simon Kochen on the foundations of quantum mechanics, proving that certain hidden variable theories are not possible, and thus colliding with the assumptions made in the famous Einstein-Podolsky-Rosen paper. The results of Kochen and Specker are still discussed today in the physics literature. Early on and in his additional weekly seminar with Volker Strassen starting in the early seventies, he reached out to complexity theory.

Ernst Specker will always be remembered for his teaching and his scientific work, but most of all for his friendship, his openness and his engaging discussions.

Posted by Lance Fortnow at 8:19 AM