A Celebration of Juris 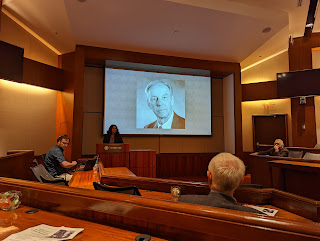 On November 4th I travelled to my undergraduate alma mater Cornell for a Celebration of the Life and Career of Juris Hartmanis who passed away in July. The workshop attracted many Cornell faculty and students, many of Hartmanis' former colleague and students, grad and undergrad, as well as his family. For the most part, the talks did not focus on technical content but rather memories of the great man.

I talked about how Hartmanis founded the field of Computational Complexity and brought me into it. Herbert Lin told the story behind Computing the Future, a 1992 agenda for the future of computer science led by Hartmanis and the challenge to the report by John McCarthy, one of the founders of AI. Should the agenda of computer science be solely in the hands of academic computer scientists, or should it take into account its role in the larger scientific and world-wide community? We still face these questions today.

Ryan Williams gave a powerful talk about how Hartmanis personally intervened to ensure Ryan had a future in complexity. We are all better off for that.

After the workshop, Ryan and I walked around the campus and Collegetown reminiscing on how things have changed in the two decades since Ryan was an undergrad and the four decades (!) since I was. Most of the bars and restaurants have disappeared. The Arts quad is mostly the same, while the engineering building have been mostly rebuilt. There's a new computer science building with another on the way.

I stayed in town to catch the Cornell football game the next day, as I once was on that field playing tuba for the marching band. They tore down the west stands to put up a parking lot and the east stands were sparsely filled watching Penn dominate the game.

Good bye Juris. You created a discipline, started one of the first CS departments, and plotted the future of both computational complexity and computer science as a whole. A master and commander indeed.

Posted by Lance Fortnow at 8:52 AM