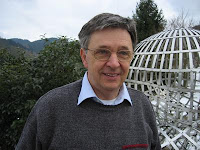 I'm absolutely elated that Lázló Lovász and Avi Wigderson won the Abel Prize. More from the New York Times, Quanta Magazine and Gil Kalai. Another example of how complexity theory and theoretical computer science has reached the upper echelons of mathematics.

I'm horrified of the spa shootings in Atlanta. I've driven by those spas many times when I lived there.

I'm saddened by the closing of Mills College in Oakland, California. I lived in a dorm Berkeley rented at Mills College during my crazy year there.

I've got mixed emotions about the death of James Levine. What he did musically with the Metropolitan opera and orchestra was nothing short of incredible. What he did to the young people he abused is inexcusable. I remember watching a Met taped videocast of Die Walküre with my daughter, enjoying the production but telling her "Do you realize we are watching an opera composed by an anti-Semite and conducted by a child molester?"  Can you separate art from artist?

Posted by Lance Fortnow at 2:57 PM