H. Venkateswaran, a much loved professor in the School of Computer Science at Georgia Tech and a fellow computational complexity theorist, is retiring at the end of December. In honor of Venkat I'd like talk about my favorite paper of his, relating LOGCFL to semi-unbounded circuits.

Let's start with context-free languages. Even if you never took a theoretical computer science course, you probably saw them in elementary school. 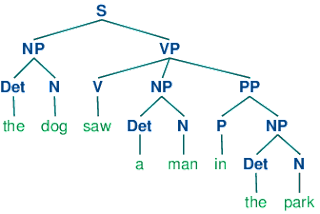 A context-free language is a series of rules like S-> NP VP or N->man. The context-free part comes from the fact that a noun phrase (NP) produces the same sentence fragments wherever it appears. CFLs have a rich theory--there have been whole textbooks devoted to the topics.

LOGCFL are the set of problems that are reducible to context-free languages with a small-space reduction. Formally, A is in LOGCFL if there is a CFL B and a log-space computable function f such that for all x, x is in A if and only if f(x) is in B.

Venkat showed that LOGCFLs are equivalent to semi-unbounded circuits, log-depth circuits with unbounded OR gates but bounded AND gates, the class now called SAC1 (technically the equivalence holds for log-space uniform SAC1 but that's not important). His proof goes through various models of alternating Turing machines and push-down automata.

Enjoy your retirement Venkat. We'll miss you!
Posted by Lance Fortnow at 12:27 PM