Last week fortune smiled on two of my friends:

The breakthrough prize started a few years ago in Life Sciences and Fundamental Physics (not sure what they mean-possibly Mathematical Physics or Theoretical Physics). This is the first year it is given for Mathematics. The other winners of the Breathrough prize in math are  Simon Donaldson, Maxim Kontsevich, Terence Tao, and Richard Taylor.

A few weeks ago I told my student Tucker, who is going to Digipen- a 4-year college with a BIG emphasis on programming computer games- that he is more likely to become a millionaire then my student Sam who is going to CMU to study pure math. I could be wrong.

I taught Jacob lots of recursion theory and he won the Westinghouse Award with a paper on Recursive Surreal Numbers; however, the work was all his own and didn't use much of what I taught him.  After that I made a policy that for every $1000 a high school student of mine wins I get a free lunch.  I emailed Jacob- and while he's not sure he'll give me 3000 lunches, he will treat me to lunch next time I am in Boston.

To quote the article, he won it for

Foundations of higher category theory and derived algebraic geometry for the classification of fully extended topological quantum field theories; and for providing a moduli-theoretic interpretation of elliptic co-homology.

I know what some of those words mean. 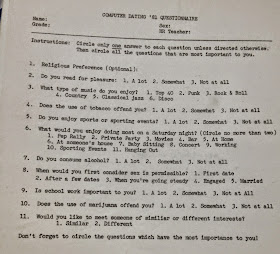 Now we have websites that use sophisticated machine learning algorithms to connect people. I met my wife the old fashioned way--at a wine and cheese party sponsored by a Boston-area Jewish singles group.
Lance Fortnow at 3:36 AM 3 comments:
Share

How many ways can you make change of n cents?

(ADDED LATER: A commenter pointed to Graham-Knuth-Patashnik for a closed form for pennies, nickels, dimes, quarters, half-dollars. I have wriitten up their account and it is available here. I also apply their technique to just get 1,5,10,25.)

How many ways are there to make change of a dollar using pennies, nickels, dimes, and quarters? This is a well known question; however, the answers I found were disappointing. They were of two types
The first answer yields an actual number but is not interesting mathematically. The second answer is interesting mathematically but does not easily yield an actual number.

I looked for a closed form on the web but could not find one. So I did it myself. The paper  is pointed to above. I did not use generating functions, just recurrences. I do not know if it is new. Whether it is old or new I hope you enjoy it. The paper actually gives a closed form for the coin sets {1,x,kx} and {1,x,kx,rx}. Along the way we derive the answer for a dollar and the usual currency by hand.

This raises some questions:


Side Bar: I asked the 10  students in my REU program to just GUESS how many ways there are to make change of a dollar with pennies, nickels, dimes, and quarters. Most made  guesses under 100. The lowest guess was 30. One person guessed 100! and one guessed 100!/2.  I then told them that it was between 30 and 100! and assigned them to derive it themselves by hand. Most were able to.
GASARCH at 8:04 AM 9 comments:
Share

The famous Probabilistically Checkable Proof Theorem due to Arora, Lund, Motwani, Sudan and Szegedy states that every problem in NP has a proof that can be checked efficiently by a verifier using O(log n) random coins and a constant number of queries. Not only amazing in its own right, the PCP theorem has significant implications for hardness of approximation. In its strongest form, no efficient algorithm can maximize the number of satisfying clauses in a formula better than a 7/8 approximation unless P = NP. Both of these results have been on my previous favorite theorems lists so lets add one more.


The PCP Theorem by Gap Amplification by Irit Dinur (PDF)

Dinur's main result doesn't prove a new theorem per se but gives a much simplified and intuitively understandable proof than the original paper. She increases the approximation gap by using an expansion graph though this causes an increase in the alphabet size which she reduces using another transformation. Repeating these steps yields the theorem. Unless you need tight bounds, Dinur's proof is the one to teach or read.

Dinur's paper followed shortly after Omer Reingold's theorem on undirected connectivity, and while these are very different proofs of different results, together they show the amazing power of expander graphs in computational complexity.
Lance Fortnow at 3:12 PM No comments:
Share

Ref/info request for an obvious appraoch to GI

Talking about Graphi Isom with some students they came up with the following idea which is certainly not new; however, I couldn't quite find much about it on the web.

When I first heard the idea from my students it was new to me. Even so, I knew that it wasn't new and that it there has to be graphs it failes on (item 1 above). How did I know this? If there were no graphs that it failed on then GI would be in R. And if GI was in R, I would know that. And so would you. But this is not a good argument to give to students.

I think its a good idea and it might work for our purposes (which may be a topic of a later blog).
GASARCH at 8:01 AM 7 comments:
Share

I'm returning from the 2014 IEEE Conference on Computational Complexity in Vancouver, unfortunately missing the last day. Several very nice talks including a wonderful survey by Shubhangi Saraf on recent problems on lower bounds in algebraic circuits (addition and multiplication gates). In short, the interesting case is depth-4 algebraic circuits with bottom fan-in √n computing homogeneous polynomials. Kayal, Saha and Saptharishi showed a 2Ω(√n log n) lower bound. Any improvement (changing the Ω to a ω) would separate VNP from VP (the algebraic version of the P v NP problem), or equivalently show the permanent cannot be computed by poly-size algebraic circuits.

At the business meeting, we discussed the plans for independence from IEEE. 60% of 189 voted for independence with open access as the main reason stated. There has been great support from the community both in volunteers to help with an independent conference and money ($42K) raised to get started. Future proceedings will likely be in the Dagstuhl LIPIcs series. Timing and a new conference name are a few of the many issues still to be worked out. Whether or not you support independence, the conference organizers, particularly steering committee chair (and my former student) Dieter van Melkebeek, are doing a strong job coordinating the efforts.

Other highlights from the business meeting.

In honor of the 100th anniversary of the birth of Wassily Hoeffding today, let's recall his incredibly useful inequality.

where X is the random variable representing the number of heads from n independent coin flips each with a probability p of being heads. Informally the sum of many independent events will, with extremely high probability, be very close to the expected value. Notice that as long as ε = 1/o(√n) the probability goes down exponentially in n and this is tight as one expects X to be about O(√n) away from pn for constant p.

Back in the 80's, probabilistic computation started to play a major role in algorithms, cryptography, learning theory and interactive proofs. To analyze these computations one needed to deal with Chernoff bounds and it was difficult to find clean and easy statements of the bounds one could use in proofs. One of my officemates in grad school, Bob Sloan, took it upon himself to write up a short document giving Hoeffding's inequality and a few generalizations. Having that write-up was like holding Excalibur in my hands, ready to do battle with probabilistic complexity.

Later Alon and Spencer gave a nice treatment in their Probabilistic Methods text and these days you can get all the formulas you want on Wikipedia.
Lance Fortnow at 10:08 AM 5 comments:
Share

The following problem was on my final for Formal Lang theory (Reg, P, NP, Dec, c.e.)

Some thoughts on this:


SO what do you think- is it a fair question? Is it a good question?

Do you support CCC's declaration of Ind? If so...

The steering committee for the CCC recently announced its decision to be independent of IEEE. Here is their open letter to that effect.

At the just completed STOC conference I received the 2014 SIGACT Distinguished Service Prize. Part of this citation reads"His blog, and many others that followed, changes the way our field communicates, both with itself and with the outside world." I owe this award to you, my readers and commenters. May the conversations always continue.

The true highlight of the conference happened a day earlier with the Turing award lectures of Silvio Micali and Shafi Goldwasser, two of the better Turing award lectures I've seen in a while. Silvio talked about the nature of proofs and Shafi showed the connections between cryptographic principles and their applications in the broader community. For example, the Goldreich-Levin hard-core bit led to list-decodable codes. The ACM taped both lectures and they should be on-line soon.

Notes from the business meeting

Law of small numbers and letters

At the LLL workshop it was noted that LLL stands for both Local Lovasz Lemma (my wife asked ``an entire workshop about a lemma?'') or the Lensta-Lenstra-Lovasz algorithm. Here we see that there aren't quite enough sequences of letters, hence some get used twice. Of course in this case it helps that Lovasz is brilliant.

The only other example I now of two well known theorems with the same initials of authors is AKS:

Are there other pairs of well known results where the initials are the same?
(This may depend on what you call ``well known'')

When someone says AKS do you think primality or sorting network?
It may depend on your age and your field. I think of the Ajtai-Komlos-Szemeredi upper bound R(3,k) \le O(k^2/log(k)).  I tend to NOT count that as another collision of initials since its the exact same authors as the other paper.